What You Need to Know Before Buying an Espresso Machine

The last time you bought a car, a television or a mobile phone you will have carefully researched the available options before you decided on which one to spend your money. After all, a mobile phone is not just a mobile phone: they differ in price, they have different cameras, different screens, various memory capacities and ranges of available apps.

Similarly, an espresso machine is not simply an espresso machine, deciding in which one you are going to invest should be done very carefully. After all, this is likely to be the largest single equipment purchase you make as a coffee shop or a business with coffee at its heart and a wise decision or a terrible mistake could have massive long-term consequences for you and your business, for good or ill.

There are a range of factors to consider before you make your final decision, but the primary one is the volume of your coffee business. Commercial coffee machines are generally classified according to the number of coffees which they can be expected to make at any one time and how many they are designed to produce per day. For this reason, when you are deciding on the one which is right for your business, you need to have a realistic picture of how many coffees you will be selling per day, and it is also important to know whether your daily business will have particularly uneven peaks, such as during lunch service: it will have to have the capacity not just for your average volume of sales across the week but for the busiest periods so that customer service is maintained at its best

To account for the varying sizes of coffee shop, commercial espresso machines themselves come in different sizes. Roughly speaking these sizes are broken down into the number of groupheads which the machines have: usually two, three or four. Generally, these can produce two, three or four drinks simultaneously, though if you have split portafilters and are serving single shots, this doubles up to four, six or eight drinks. 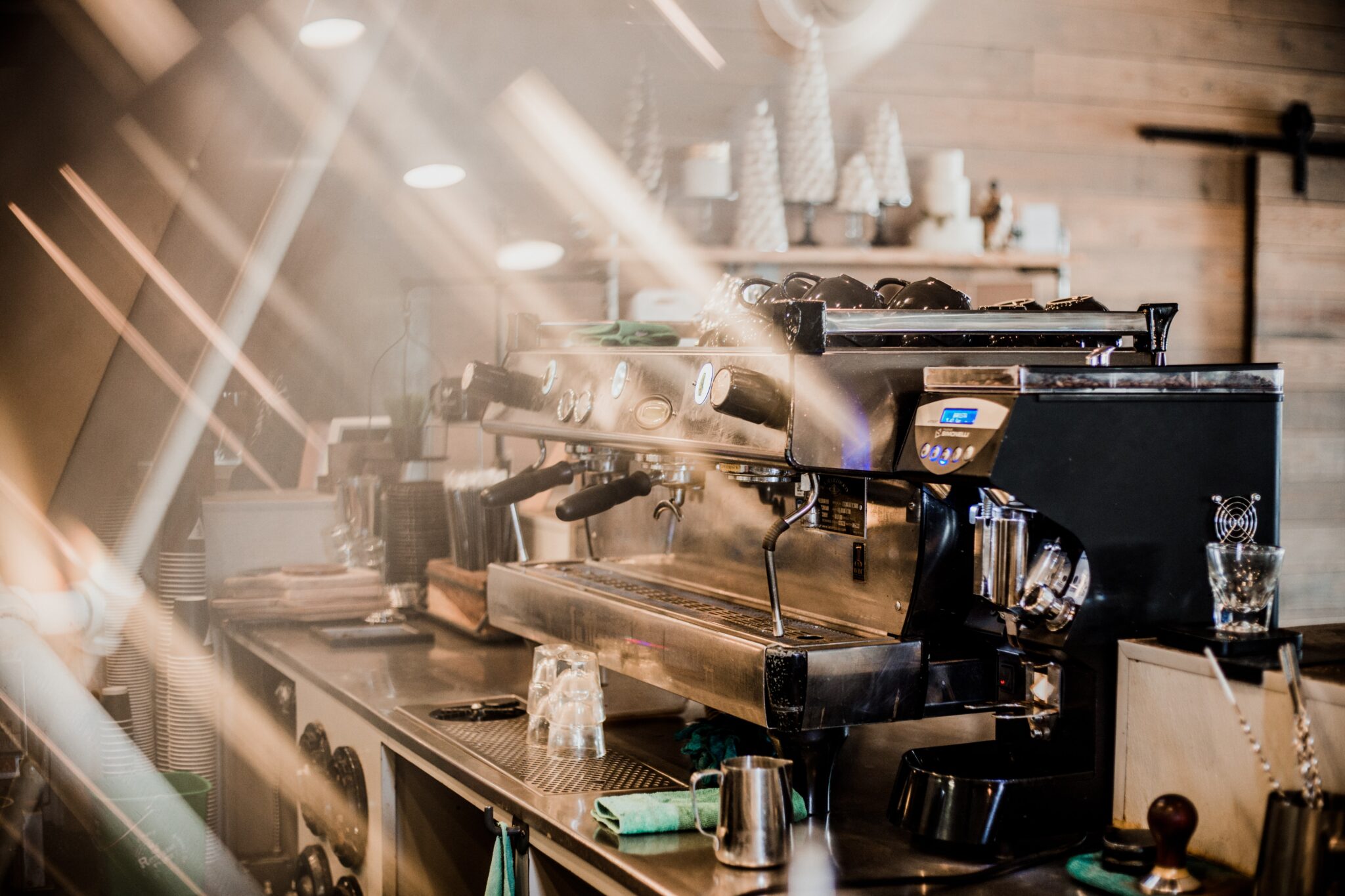 The more groupheads a machine has, the more expensive it tends to be, which is why it is important to have a realistic model of the volume of business you can expect. It is not often mentioned but it is also important to have a good idea of how many baristas will be in your team. If you consistently have more groupheads than baristas then you have either invested in a larger machine than you need for your business or in one which is too large for your staffing levels. 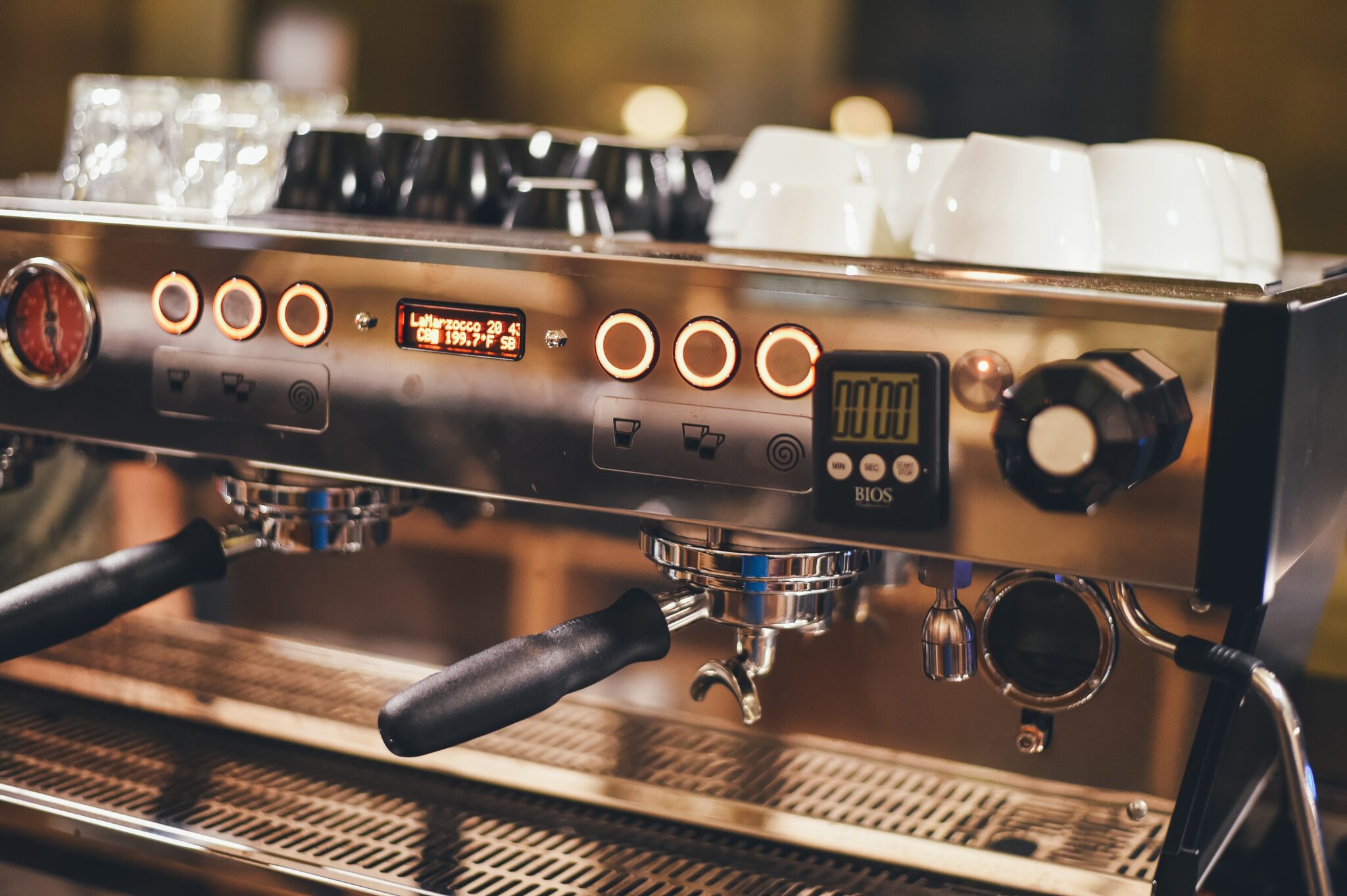 You may not actually need a full commercial espresso machine, there are a number of commercial contexts in which a bean to cup machine may be more appropriate. In contexts where there is not going to be a trained barista on hand or volume is not as high as in a speciality coffee shop these may be more appropriate. For example, self-service scenarios such as cafeterias, staff rooms or small offices. The higher end machines such as our La Cimbali S30 guarantee a high-quality coffee every time, with an electronic screen for selecting your drink, a built-in grinder for the freshest possible taste and even a steam wand to create textured milk. It even bucks the trend by having the capacity to produce an astounding 300 drinks per day, giving the largest commercial machines a run for their money.

However, if you are providing a barista-led, speciality coffee experience then you are going to need to stick with a multi-head commercial espresso machine. These machines give the barista the greatest control over the coffee which they make and serve to your customer, often with added layers of automation which allow certain elements of the process to be programmed in.

These units also tend to have a large single boiler which, if thermostat controlled, have long, rolling variations in temperature which makes maintaining a consistent standard in your coffee very challenging, though not impossible.  To overcome this, it is worth looking out for one which has a PID fitted. PID stands for Proportional-Integral-Derivative and is a generic term for any device which uses a PID algorithm to control any process, in this case the heating and temperature maintenance of water without large variations in temperature. This device not only maintains the temperature of the water in the boiler, it also maintains the quality of your coffee and makes your machine more efficient, decreasing its running costs. In some cases, even larger multiple boiler models, such as our San Remo Opera have multiple PIDs controlling each boiler.

What is also often forgotten when the commercial, money-led decision is being made is that the espresso machine can also add a sense of theatre and drama to the process, the machine can become as much a part of the customer experience as the coffee itself.

A beautiful example of this is the Café Racer range from San Remo: designed as a tribute to classic racing motorcycles this machine has a vast range of customisable options, including leather motorcycle ‘panniers’. This magnificent piece of design is always a talking point wherever it appears and is guaranteed to elevate the customer experience in any shop which proudly displays it at the centre of its coffee bar. Others, such as the Verona SED pay tribute to the great cars of the 60s and the age of the American cruiser with long sleek curves combined with the shine of classic chrome. 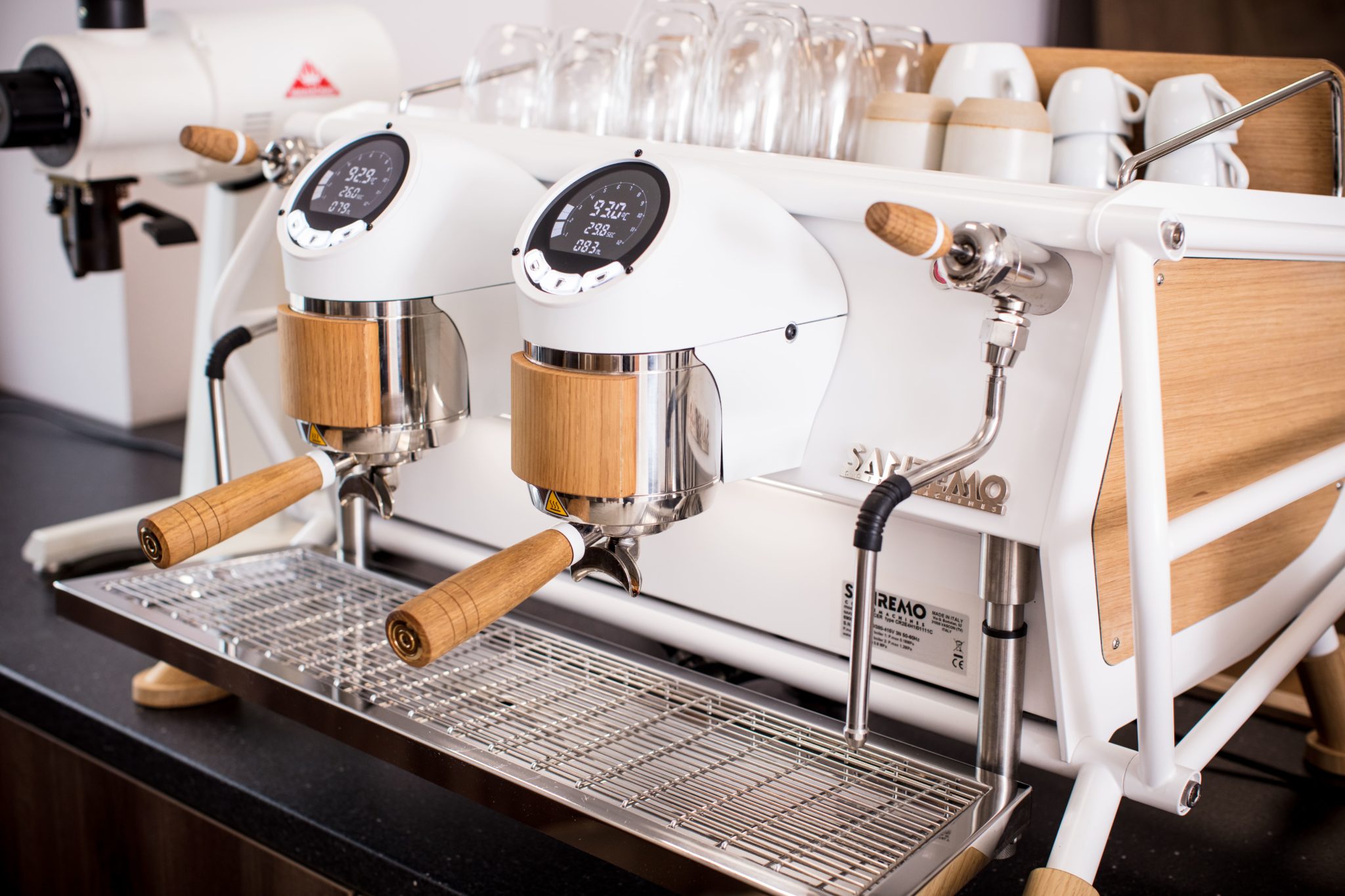 This physical presence of your espresso machine is another important consideration, its footprint on your bar space is likely to be considerable and you are going to need a grinder too. This means a lot of space is spoken for when you also need a pass and sink space and working areas.

Of course, a very important consideration is budget. Once you have a good idea of your volume of business, barista-led or self-service scenario, number of groupheads, level of automation and importance of design and aesthetics you can assess the price bracket which you need to approach when making the final choice of espresso machine. It is an obvious statement but it is advisable to buy the best quality you can afford: in an espresso machine it does pay you back, the price tag does reflect the extra features such as programmability and important details such as the quality of the steam-wand which is so important to that extra theatrical latte art for your coffee. Having said that, the big-name manufacturers produce hardy, reliable and quality machines across all of their price ranges.

It is worth finding opportunities for some experience of the choices you have in mind before you make the final leap and commit your precious budget. Look for suppliers and manufacturers who, like us, will give you chance to experience the machine first-hand before you buy. Or even find a friendly coffee shop who can share their experience with you, this is a business full of enthusiasts who will generally be eager to share their thoughts and help with advice.

Fancy seeing a quality traditional espresso machine in action? Get in touch with us and we can arrange a live demonstration for whatever you are looking for.